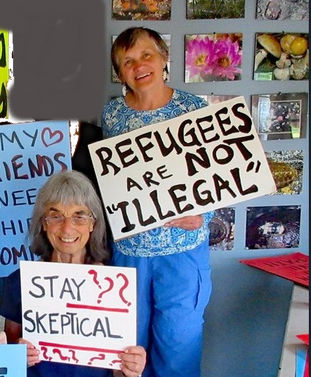 ​The JCIRA Board and community are immensely grateful to our founders. Jefferson County Immigrant Rights Advocates (JCIRA) arose out of grassroots efforts involving many people in Port Townsend. Key among these were Katie Franco, Libby Palmer, and Jim Buckley.

Two of the founders, Katie Franco and Libby Palmer, have continued to play major roles in JCIRA until this day. They both had long been active in social justice struggles before JCIRA, Katie in Wisconsin, California, and Pennsylvania, and Libby in New York City and Connecticut.

​***
Katie Franco
Katie is fluent in Spanish, was married to a Mexican man, and has a longstanding love of Mexican culture. Soon after moving to Port Townsend, she volunteered her services in translation and interpretation to Head Start, Dove House, and other community organizations.

Libby Palmer
Libby’s parents had been immigrants who were forced to leave their native countries by anti-Jewish pogroms in Europe. She grew up in a household of activists, giving her a rich background in community organizing. Libby was an educator and was also a co-founder of the Port Townsend Marine Science Center.

Jim Buckley
Jim has been involved in social justice struggles since the 1960s. He speaks some Spanish, loves Latin music, and has traveled extensively in Mexico, Guatemala, and Honduras. An early supporter of immigrant rights in Ohio and in Port Townsend, he also taught ESL classes and created the Border Patrol Free website, a precursor to the JCIRA website.
​
​“We did what we had to do, even if we didn’t know how to do it. You become more effective and strategic as you go along. But it's important to start."  - Katie Franco
​
The Origins of JCIRA

In 2007, the Border Patrol (BP) dramatically increased its actions on the Olympic Peninsula. BP set up checkpoints, stopping cars and buses to ask people about their citizenship and demanding IDs, mainly from people of color. Several people in Forks were suddenly deported, and the level of fear rose across the Peninsula, with families afraid of being separated.

​A Turning Point: Trump’s Election
Trump’s election in 2016 led to a vast increase in the number of people concerned with the broader issue of immigration. In early 2017, Trump’s executive order banning foreign nationals from seven Muslim countries galvanized local people. Eighteen people participated in the group’s first official meeting, and the numbers rapidly increased after that. New yard signs sprang up around Port Townsend, funded by donations, reading “Immigrants and refugees welcome here. No Muslim ban, no walls.” The group chose the name JCIRA—Jefferson County Immigrant Rights Advocates—to indicate that they would tackle all issues of immigrants’ rights. 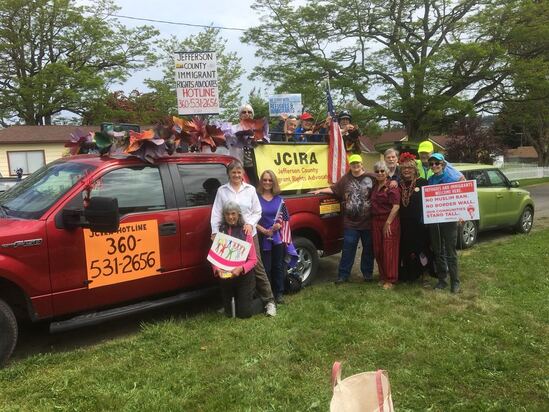 A Rhody Parade with many ESL students and Katie and Libby in the forefront.
​A Boost from KIAC and Ray Garrido
Katie, Libby, other JCIRA members and local immigrants met with Ray Garrido of Kitsap Immigrants Assistance Center (KIAC) and, at his urging, formed a Washington State 501(c)(3) organization, sparking more growth. Each JCIRA action drew more supporters and volunteers, determined to change the undemocratic and racist policies promoted by the federal government under Trump.
​
“You don’t do anything alone. You might not even have the courage to do it. That’s why it’s always important to reach out and work with other people.”   -  Libby Palmer

Want to learn more about JCIRA's founding? Download the article below based on a conversation with Katie Franco and Libby Palmer: