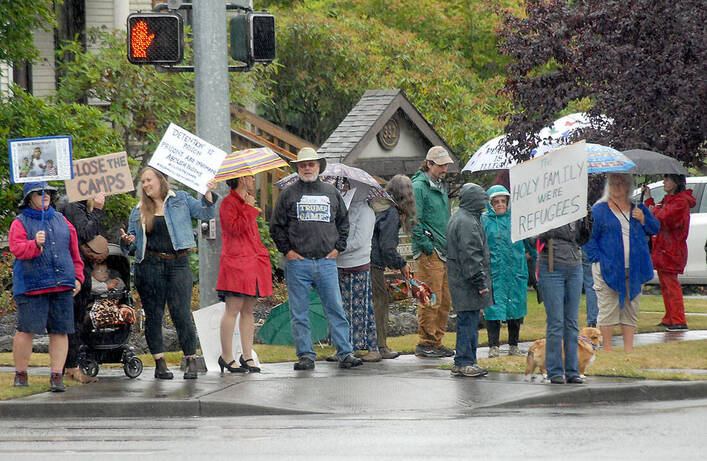 Protesters stand in front of the Port Angeles office of U.S. Rep. Derek Kilmer on Tuesday in opposition to the U.S. Customs and Border Protection practice of separating children from their refugee families at the U.S. border. The Close the Camps rally, part of a national effort organized by moveon.org, drew about 50 people to the intersection of Fifth and Peabody streets. Link here

June 26, 2018
Port Townsend Leader
All four corners of the intersection between Highway 116 and Irondale Road in Port Hadlock were packed with more than 250 protestors June 22, hoisting signs and shouting slogans to express their objections to the Trump administration's policies toward detaining illegal migrant families.

Although President Trump signed an executive order June 20 to end the separation of children from their parents who entered the United States illegally, the protest organized by the Jefferson County Immigrant Rights Advocates still proceeded as scheduled, with JCIRA Board Chair Libby Palmer distributing fliers explaining why they still found the President's policies unacceptable.

"There are still more than 2,300 children who have already been separate from their families, and haven't seen their mothers in weeks," Palmer said, who noted the executive order does not state what steps those families might take to be reunited. "The fact that I don't even know how long it's been, for so many of these kids, makes me cringe inside.
​
Palmer likewise criticized the executive order for leaving the administration's "zero tolerance" policy toward illegal migrants intact, and pointed out loopholes in its language, which could allow migrant children to be separated from their parents again after 20 days, or if "available resources" do not exist to detain them together. 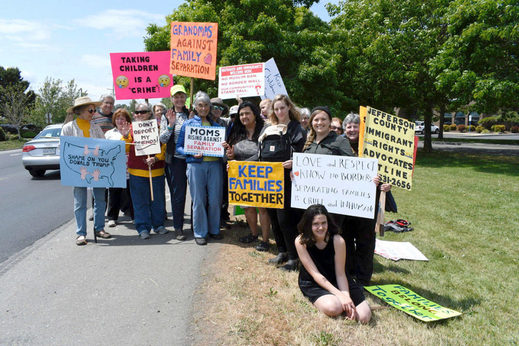 PORT TOWNSEND — A group of 55 men and women stood with signs Tuesday to bring awareness to an immigration issue facing parents and children at the southern border of the United States.
​
Members of the Jefferson County Immigrant Rights Advocates (JCIRA) gathered at the intersection of Sims Way and Kearney Street waving signs and banners — emblazoned with such sentiments as “Keep families together” and “Taking children is a crime.” They yelled slogans and applauded when some of the drivers passing by responded positively with a honk and a wave. To read more click here.

Immigrant advocates hope for safety, security for all families 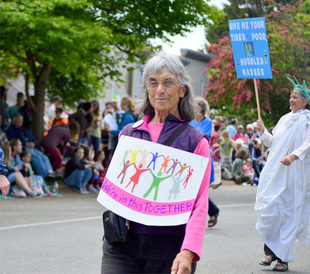 PORT TOWNSEND — When Morris and Ruth Goldstein crossed the border, they had little in the way of documents. What these immigrants did have: hope for a better life than what they’d been through in Poland and Russia.

And so they went on to find work and home, raising a family in these United States. Morris regularly sent blankets and other supplies back to his Polish Jewish brethren in Eastern Europe, in hopes of helping those who hadn’t yet gotten out of a hostile place.

Ruth and Morris’ American family includes daughter Libby Palmer of Port Townsend. She seeks to carry on her late parents’ work, nearly 100 years after they arrived on Ellis Island, N.Y.

In a Port Townsend cafe on a recent afternoon, Palmer explained her hopes for her community: that parents and children live here together in peace and safety, as she does.

Palmer is a cofounder of the Jefferson County Immigrants Rights Advocates — JCIRA — which despite its name seeks to help migrants in Clallam County as well.

The registered nonprofit organization, which sprang from discussions after the first Women’s March in Port Townsend in 2017, offers support to people fleeing gang violence, domestic abuse and grinding poverty in their homelands of Mexico and Central America.

For Palmer and her fellow advocates, JCIRA is a way to connect, human to human, with her neighbors — outside the rhetoric swirling around national immigration policy. To read more click here 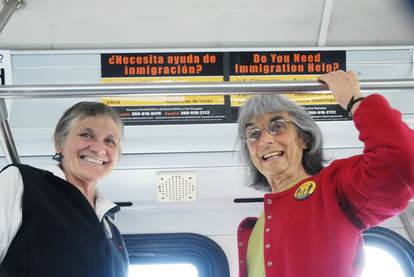 To get the word out about the availability of legal assistance, signs were posted on 11 Jefferson Transit buses in April. The signs, in both English and Spanish, are aimed at spreading the word that volunteer Department of Justice–accredited representatives from the Kitsap Immigrant Assistance Center can help local immigrants with most immigration matters, for free or low cost.
​
“Immigrants can have an initial interview for either no cost at all or for only $30. At that interview, they’ll get an estimate of possible future application fees. All helpers are trained volunteers, and no fee is charged for their services,” said Palmer. To read full article click here 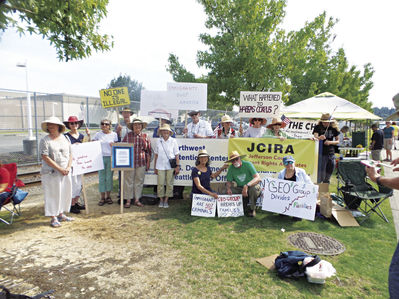 Fifty protesters from Port Townsend and Seattle visited the Northwest Detention Center in Tacoma Sept. 3 to show their support for immigrant detainees.

“We talked to families as they went in to visit their family members and friends, and talked to them as they left, walking to their cars,” Palmer said. “We were all emotionally affected by the stories we heard behind each individual’s detention there.”

The Northwest Detention Center (NWDC) is a immigration prison located on the tidal flats at the port of Tacoma. Opened in 2004, the NWDC is privately owned and operated by The GEO Group Inc. for U.S. Immigration and Customs Enforcement (ICE). The NWDC’s current capacity is 1,575, “making it one of the largest immigration prisons in the United States, and the largest on the West Coast,” in Palmer’s words. To read full article click here

Garrido recalled how 2004 saw both the start of the program and the loss of its funding, which led to volunteers conducting it as a mobile program, meeting in open church rooms and sites such as the Bremerton YWCA.
​
Garrido was an (ESL) tutor in English as a second language when he first encountered the group in 2009, and he soon became a troubleshooter who responded to a broad variety of immigrants’ needs, from how to pay bills and read letters to navigating landlord/tenant disputes. To read full article click here

Dozens gather in Port Townsend for protest against raids, deportation 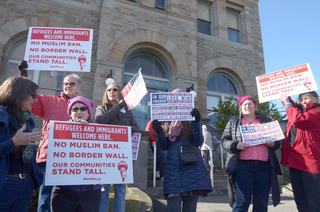 PORT TOWNSEND — More than 60 people gathered outside the Port Townsend post office to show support for immigrants and to protest President Donald Trump’s campaign promises of a border wall and the deportation of undocumented immigrants.

“It was done spontaneously, which is what made it so amazing,” said Libby Palmer, one of the women who organized the protest.

Palmer said she was upset by the reports of recent Immigration and Customs Enforcement (ICE) raids that has led to the arrests of more than 600 people across the county. To read more click here